The Power Pedal is derived from race track technology providing outstanding results. It alters the performance without a physical increase to BHP or torque. The dynamics of performance delivery is chosen using the dash mounted adjustment. The pedal performs well stand alone and can be used in conjunction with other performance products for greater improvement. 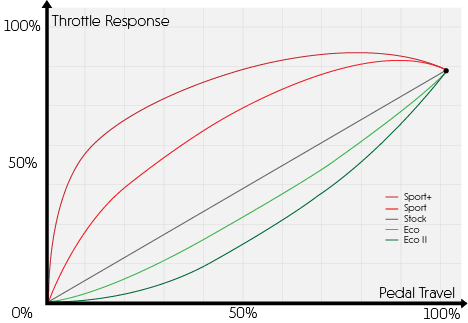 The Power Pedal is the ideal add on to any existing performance device. Control the delivery of power from your fingertips.

The power Pedal can be set to Eco modes for economy or even locked in an eco mode when another driver is using the vehicle.

The Power Pedal is the ideal add on to any existing performance device. Control the delivery of power from your fingertips.

The power Pedal can be set to Eco modes for economy or even locked in an eco mode when another driver is using the vehicle.

Having bought a second hand VW Transporter T4 many years ago without the intercooler, I always felt it was a little sluggish. It just needed a bit more get up and go. A friend mentioned Tunit to me and one was soon fitted. What an amazing difference it made. It felt like the engine had been set free. Much more umph which made it easier to drive and about 10% more mpg. The centre that I bought it from were very helpful in getting it set up how I wanted with a little tweek here and there when ever I passed by. It didn't take long before I fitted one to my Skoda Fabia VRS. This was just incredible. It took off like a rocket, had so much more get up and go, more fuel economy - about 12% better and was even more enjoyable to drive. When the good old T4 finally had to go and was replaced by a T5, I knew I'd be OK with the lower hp model because I could add a Tunit to that. Once again there was a total revelation in the power from the new van. At least 10% better fuel economy along with the usual other benefits. When ever I now tow a trailer I just turn up the Tunit to 10 to give me a bit more power, which helps immensely when pulling away with a heavy load up hill. Superb is a good word to describe these units and several of my friends that now have them would agree.

Hopefully you will have a couple of photographs of Snowy in his retirement home in sunny Spain. He is a 1996 Mercedes E class Elegance, 2 litre petrol car. I bought him from a friend where he was surplus to requirements. The car had done a genuine 76k miles from new when I bought it. There were small bits of rust on the wheel arches and the bottom of the doors as well as the alloys, so I had the alloys refurbished, the rust cured and the car resprayed. It looks, as you can see, very well and should last forever now garaged in Spain. However it was not very economical and I have had a tunit fitted to my present car, and the one before that which is now my partner's and so I enquired some time ago and was told the car wasn't suitable. Anyway this year when I asked again, or saw a new advert, not quite sure, I was told that you could do a petrol car but hadn't done so yet. So I took the plunge and had one fitted. On the 10th November we drove to Portsmouth, took the ferry to Cherbourg and then drove through France and into Spain, then down to the Costa Blanca. The car behaved beautifully, and, although we never pushed it, I think I felt a small improvement in its acceleration. Having got to Spain we pottered about in the car for a couple of weeks before I did my fuel calculations as I didn't think it would be a fair reflection just to go off the long distance driving to get there. I had kept every one of my petrol receipts and kept a note of the mileage we had travelled overall, around 2,000 miles. The previous owner had told me that he could get around 32 mpg if taking it easy. In the short time I had the car I would have said that was fair. I can tell you now, quite honestly that my calculations showed that overall we achieved more or less 38 mpg. I was delighted. Of course we were in no hurry and the car was driven with respect, but even so I think that is an excellent improvement and that having the Tunit installed was well worth it. So I'm happy